The last vestige of the statist COVID-19 power freaks is to claim that we must coerce everyone from interaction to "flatten the curve" of the virus to ensure that healthcare systems are not overwhelmed.

When they are on television, this chart is flashed on screens: 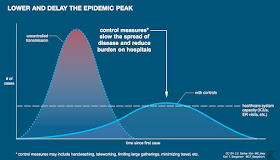 But notice a key point about this Carl T. Bergstrom and Esther Kim creation.

There are no numbers attached. It is a graphic to display a thought experiment but no one knows exactly what the two curves currently really would look like under different policy and environmental conditions.

In other words, it is pretty useless for creating a detailed policy.

The data is just all over the place at this point.

If you don't know the R0 for the virus (that is how many people an individual infected person transmits the disease to), if you don't know how many of the infected will require hospitalization and you don't know what policy steps will change the curve to what degree, you can't possibly know if the curves would be anything like that depicted.

Further, it takes no account of the possibility that warm weather may dramatically slow growth of the virus or how self-isolation by elderly and those with serious chronic health conditions would change the demands on the healthcare system. It seems to me, this last step alone would pretty much flatten the curve without all the nation bending "close the country down" drama.

Bottom line: Any "expert" claiming that we must put draconian measures on the entire population because we "must flatten the curve" is an ass.

The most important thing is for those who are elderly, or have serious health conditions, to self-isolate (They should be doing this anyway in winter months becasue of the flu). This will solve the excess demands on the healthcare system until treatments and vaccines are developed.

And the rest of us should be left alone so that we can suffer for a week if we get infected with COVID-19, rather than limiting our lives for weeks, if not months, to flatten a curve that no one knows what the old curve or the new curve would look like if the elderly and chronic ill were already self-isolating.