Why Are College Students So Afraid of Me? 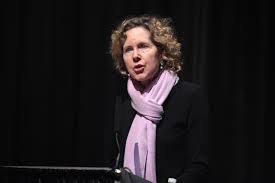 Few things upset American college students more than being told they aren’t oppressed. I recently spoke at the College of the Holy Cross in Worcester, Mass. I argued that American undergraduates are among the most privileged individuals in history by virtue of their unfettered access to knowledge. Far from being discriminated against, students are surrounded by well-meaning faculty who want all of them to succeed.

About 15 minutes into my talk,
as I was discussing Renaissance humanism, a majority of the audience in the packed auditorium stood up and started chanting: “My oppression is not a delusion!” The chanters then declared that my sexism, racism and homophobia weren’t welcome on campus. “You are not welcome,” they added, as if I didn’t know.

The protesters drowned out my response before filing slowly out of the room, still loudly announcing their victimhood and leaving dozens of seats empty that could have been filled by students who had been turned away for lack of space. (The protesters had hoped to occupy the entire auditorium before vacating it, so no one else could hear me speak.)

In a subsequent open letter, a senior claimed that I came to Holy Cross to “discredit, humiliate, and deny the existence of minority students.” In fact, I came to urge the entire student body to seize their boundless opportunities for learning with joy and gratitude.

The maudlin self-pity on display at Holy Cross doesn’t arise spontaneously. It is actively cultivated by adults on campus. A few days before the Holy Cross protest, faculty and administrators at Bucknell University in Lewisburg, Pa., convened a therapeutic “scholars” panel to take place during another talk of mine. The goal was to inoculate the university against the violence that I allegedly represented.

Bucknell’s interpersonal violence prevention coordinator; the director of its Women’s Resource Center; the interim associate provost for diversity, equity, and inclusion; a women’s and gender studies professor; and an economics professor discussed rape culture, trauma and racism. Students and faculty were then invited to join in painting “self-care” rocks.

This craft activity, in which participants write feel-good messages on stones, was originally designed for K-5 classrooms. It may not be what parents paying Bucknell’s $72,000 annual tuition and fees had in mind. No matter. According to Bucknell’s interpersonal violence prevention coordinator, it was “especially important” for students who had attended my talk to come to the scholars “space” afterward and practice self-care. The interim associate provost for diversity, equity, and inclusion said that the administration’s willingness to let my talk proceed shows that it values free speech more than the community’s trauma.

In anticipation of my Bucknell talk, student journalists had claimed that “‘free speech’” merely amplifies “hate speech,” and that hate speech such as mine was intended to “attack students of color” and “survivors of sexual assault.” An English professor cheered them on. The Bucknell Faculty and Staff of Color Working Group urged colleagues to support those whose “first-hand experiences with injustice” at Bucknell were “invalidated and perpetuated” by my arguments.

Bucknell’s Democratic Socialists of America organized a protest at which participants—in between chants of “Hey hey! Ho Ho! Heather Mac has got to go!” and “No justice! No peace!”—were encouraged to share their personal experiences of injustice at Bucknell. Sadly, there is no available record of what the protesters came up with.

Students who can be persuaded to see oppression on an American college campus—where traits that still lead to ostracism and even death outside the West are not just tolerated but celebrated—can be persuaded to see oppression anywhere. The claim that American universities, and the U.S. in general, are defined by white supremacy is the one unifying idea on college campuses today, in the absence of a shared curriculum dedicated to civilization’s greatest works. And that idea is spreading. School systems across the country are training teachers and administrators that colorblind standards and the work ethic are instruments of white privilege. Any private institution without proportional representation of minorities and females is vulnerable to attack, since bigotry is the only allowable explanation for the lack of sex and race “diversity.”

The promiscuous labeling of disagreement as hate speech and the equation of such speech with violence will gain traction in the public arena, as college graduates take more positions of power.