VIDEO Sick Bastard Predicts US To Be in War Everywhere 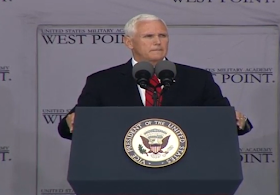 This is what Vice President Pence told the West Point graduating class on Saturday. It has to be classified as insane:


It is a virtual certainty that you will fight on a battlefield for America at
some point in your life. You will lead soldiers in combat. It will happen.

Some of you will join the fight against radical Islamic terrorists in Afghanistan and Iraq.

Some of you will join the fight on the Korean Peninsula and in the Indo-Pacific, where North Korea continues to threaten the peace, and an increasingly militarized China challenges our presence in the region.

Some of you will join the fight in Europe, where an aggressive Russia seeks to redraw international boundaries by force. And some of you may even be called upon to serve in this hemisphere.

And when that day comes, I know you will move to the sound of the guns and do your duty, and you will fight, and you will win. The American people expect nothing less.

So, wherever you’re called, I urge you to take what you learned here and put it into practice. Put your armor on, so that when — not if — that day comes, you’ll be able to stand your ground.