The Drum Beating in the Face Continues: A Washington Post Columnist Continues to Attack the Covington Kids 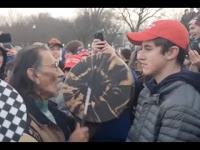 First, he establishes his bonafides that he is aware that the Black Hebrew Israelites are trouble:

There were a few lessons I only needed to learn once when I lived in New York City from 1990 to 2007...never, ever, walk by the Black Israelites, especially with your white boyfriend (you’re just asking for trouble)...

As has been my experience, the Black Hebrew Israelites hurled racism, homophobia and worse at anyone and everyone who crossed their path.

But, then he blames the Covington kids chaperones and then after watching the video evidence, who knows how many times, he found this Covington kid "violation":


At first, the Covington students kept their distance. By the time, Phillips drummed his way into the situation they had moved much closer to the Black Hebrew Israelites. And at various points, the young men gave as good as they got. The Black Hebrew Israelites called the young boys “school shooters,” and one asked, “What, you about to go postal?” A student clad in gray sweats and a blue hooded sweatshirt tartly replied, “No, I’m going to go take a s---.”

Call out the damn political correctness police! After being harangued by the Black Hebrew Israelites, as Capehart indicates they are want to do, a high school kid indicates in a crude manner that the BHI taunts don't bother him. A high school kid!

I mean Capehart is all street corner raged upset:


Many on the right are using the equal opportunity bigotry of the Black Hebrew Israelites as a way to excuse the disrespectful and obnoxious behavior of the Covington boys.

Capehart then pulls his Catholic card:


“Respect your elders” was a constant refrain from my mother and other relatives when I was growing up. And it was reinforced during my own years in Catholic schools. It didn’t matter whether you knew them or not, whether you were related to them or not. A child and an adult are never on an equal playing field. And yet, for me and many others, Sandmann’s actions and those of his classmates were those of disrespectful children toward an adult. No amount of rude, homophobic, racist, anti-Catholic invective from loons like the Black Hebrew Israelites justifies what they did.

What the hell is Capehart talking about? When Phillips got into Sandmann’s face, Sandmann did nothing. That was respecting an elder who was acting in a bizarre fashion by his actions of beating a drum in the kid's face. And they don't call them war drums for nothing. I doubt Sandmann ever before experienced an adult walking up to him beating a drum in his face.

Perhaps an adult would have walked away from Phillips but there was no disrespect.

Lefties just have to shift the blame on whites, even when what we saw was a youth-testosterone filled kid not taking the bait of an agitator. He acted with remarkable respect and restraint.

But at the Bezos rag, where the boss these days is acting like a teenager, whites must be attacked. The drum beating in the face continues.