Socialist Students Call for Ban on Chick-Fil-A For Being an 'Industrial, White Supremacist, Imperialist, Capitalist Cult' 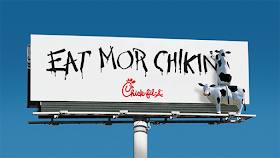 Athens EarthStrike, some of whose members also belong to the Athens Young Democratic Socialists of America student group, which describes itself as the official chapter of YDSA Athens and the University of Georgia, is targeting Chick-fil-A for its use of non-compostable packaging and is further claiming that the chicken chain uses unsustainably-sourced poultry, according to the student publication The Red & Black. The group also claimed that “capitalist cults” of Chick-Fil-A and the Georgia poultry farms “as a whole exemplify violence," the group told Campus Reform.

"The industrial, white supremacist, imperialist, capitalist cults of Chick-fil-a and the Georgia poultry farms as a whole exemplify violence," Athens EarthStrike told Campus Reform. "One of the major poultry suppliers for Chick-fil-a is Koch. Koch targets the most vulnerable people in our immigrant communities to work as employees. Factories are built in low-income communities of color. These jobs are demoralizing, difficult and pollute the environment around them leaving communities in even worse living conditions."

Geez, and here I thought these immigrants risked their lives to come here because conditions are better here. And, I eat the chicken because it tastes good.

Erin Cooke, a UGA student and former Chick-Fil-A employee, told Campus Reform that during her time at Chick-Fil-A, the company culture was “the opposite of wasteful.” But Cooke still noted her lack of shock at EarthStrike's demands.

“I’m not surprised honestly. It’s nothing new. Those on the left continually go after organizations and companies which they are threatened by [and Chick-Fil-A] no doubt is one of the largest and most popular Christian companies,” Cooke said. “If Chick-Fil-A was removed on campus, there would be an uproar from the student body. It’s always the most popular restaurant with lines consistently going out the door.”