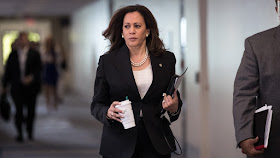 I hasten to add, I have nothing against Israel. It is just that I stand with George Washington who advised that the United States should not get involved in foreign entanglements.

Kamala Harris explaining her views on the US/Israel relationship and the broader US policy toward the Middle East, to AIPAC in 2017: pic.twitter.com/YZu4UMxVVm
— Glenn Greenwald (@ggreenwald) January 23, 2019