A Plea to My Fellow Libertarians: Please Throw Donald Trump Under the Bus

As long time readers of Target Liberty know, I have been no supporter of Donald Trump.

Pretty much from the start of his campaign, I warned that he did not hold libertarian principles, that he had an infatuation with the military, that he held horrific views on trade and was not going to close down the Fed, etc.

But some libertarians championed Trump as "better than Hillary." At the time, I believed this was a strategic blunder in that there really wouldn't be that much difference between Trump and Hillary and that Hillary, as a target for libertarians would have been much more appealing.

A segment of the masses would have flocked to libertarian websites to learn arguments that they could use against Hillary supporters if Hillary had become President. But Trump, as I had expected, has attracted that segment and drained that segment away from libertarian sites.

Now comes an even greater danger. Some libertarians continue to support Trump despite the fact that
the Left, with some justification, is pointing out that Trump is attracting a loud group of fascist supporters.

Friday night in Charlottesville, one youtube video captured the Trump-supporting pro-white protesters carrying KKK-like torches, saluting Nazi-style and marching through the streets chanting an old Nazi favorite, "blood and soil."  (Yes, yes, I know "blood and soil" was a phrase that had been used before the Nazis adopted it but so was the swastika. In this crowd, it was obvious, as I will show below how they were using the term---in support of fascism.)


On Saturday morning in Charlottesville, there was another group chanting "blood and soil."


This group, all dolled out in matching clothing, is wearing Vanguard America dress.

At the Vanguard America website, we learn from their manifesto what the shouting of "blood and soil" means to them. The manifesto is subtitled AMERICAN FASCISM and says:


An America based on the immutable truths of Blood and Soil. A multicultural nation is no nation at all, but a collection of smaller ethnic nations ruled over by an overbearing tyrannical state. Our America is to be a nation exclusively for the White American peoples who out of the barren hills, empty plains, and vast mountains forged the most powerful nation to ever have existed. Vanguard America stands indomitably opposed to the tyranny of globalism and capitalism.... Like all independent nations, America should strive for a truly national economy. An economy that is self-contained, and free from the influence of international corporations, led by a rootless group of international Jews, which place profit beyond the interests of our people, or any people.

I have said many times, I think it is goofy, but if people want to just hang around with their own that is fine with me.  But these people are not talking about the freedom to associate on one's own property with whomever one chooses. This group is talking about America becoming exclusively white. Thrown in with some very bad Trumpian-style anti-trade, nationalist, economics.

Here are some of the posters that can be purchased on the Vanguard site: 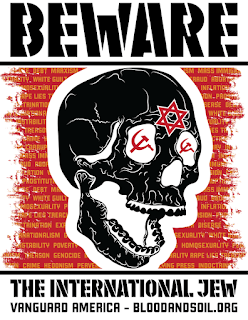 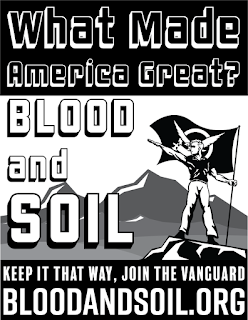 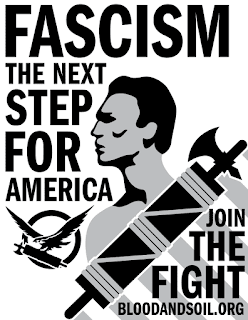 These kinds of characters are driving the youth of America into the hands of the Leftists. These characters are Trump supporters and Trump seems very reluctant to condemn them the way he condemns others. Trump is, with some justification, being associated with them.

What exactly could be the strategic reason for libertarians to support Trump under these conditions?

Trump is bad on just about every policy position beyond the Federal transgender bathroom issue.

I ask again, What do libertarians gain by associating with him?

I am not suggesting that libertarians are going to sway the masses anytime soon and gain great victories but if we don't show clearly that there is a third way, libertarianism will never advance at more than a snail's pace, if at all. The students are not going to learn in colleges and universities that there is a libertarian alternative to Trump. You know it and I know it. They are going to be shown the door labeled socialism. We are the only hope that they learn of a Liberty option. An alliance with Trump, and I repeat he is horrific on nearly all issues, makes no sense. The millennials are not going to follow and it is easy to understand why.

And so I call on my libertarian friends who have done much to advance liberty to stop the support of Trump, throw him under the bus.

He has done nothing for the movement except suck air out of it.

And by throwing him under the bus, I do not mean that libertarians should remain silent about him or occasionally mumble something about one of his horrific policies. We need to condemn him with a very loud voice every time he says something that is not in line with libertarian principle---which will be almost every day. Only in this way can we accelerate the knowledge to students and the masses that there is an alternative to both Trump and social justice warriors---and that alternative is Liberty.

Robert Wenzel is Editor & Publisher of  EconomicPolicyJournal.com and Target Liberty. He also writes EPJ Daily Alert and is author of The Fed Flunks: My Speech at the New York Federal Reserve Bank. Follow him on twitter:@wenzeleconomics and on LinkedIn. 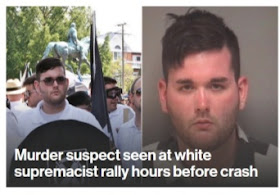 James Alex Fields, the man accused of fatally plowing his car into a group of counter-protesters in Virginia on Saturday was photographed hours earlier carrying a shield bearing the emblem of Vanguard America.
at 12:01 PM
Share